The Stare with Yaman Ibrahim 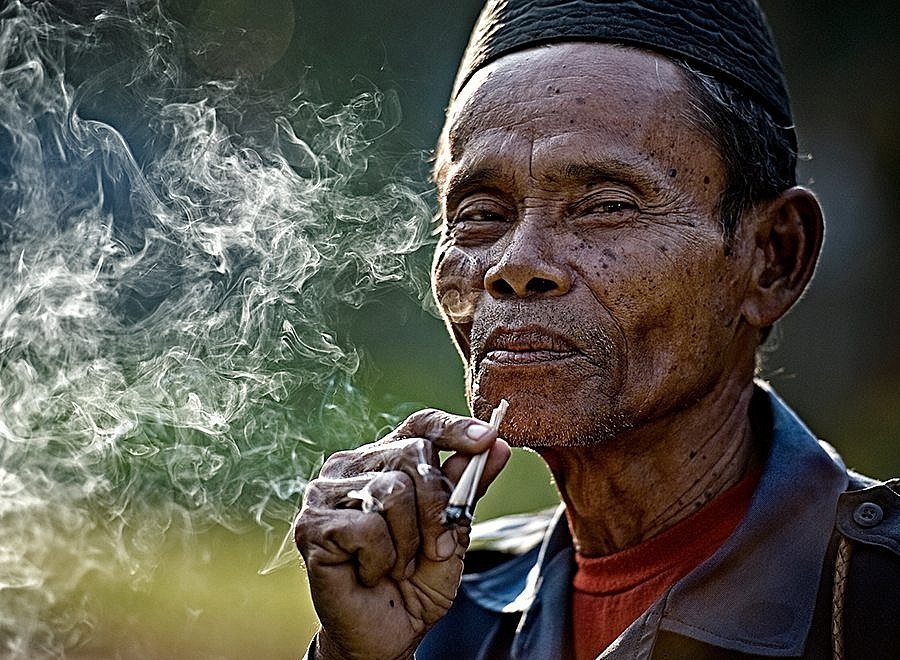 Yaman Ibrahim is an Malaysian photographer renowned for his dramatic, experimental photographs of Indonesian landscapes and people. The stunning clarity of his photographs lends an unreal character to his works – especially to his portraits. Every freckle and every wrinkle is captured and brought into sharp focus by his camera, and the smallest subtleties in expression and posture are communicated to the viewer.

This photograph is part of his Smokers collection. In this series, Ibrahim has captured people – most of them elderly – holding cigarettes and bathed in delicate clouds of smoke. The contrast between the stark definition of their faces and the indistinct threads of smoke gives the photographs an artistic quality that is unique to the photographic genre. The person in this particular photograph is framed by sunlight, and he stares directly at the viewer with the corners of his mouth slightly pulled down, as if he is attempting to suppress laughter. His rather playful expression detracts from his gaunt cheeks and visible age to create an impression of youthful impishness.

This amused, almost contemptuous expression is what makes this piece so memorable. Despite the man’s apparent poverty – evidenced by his leathery, sun-beaten skin, simple clothing, and hand-rolled cigarette – he meets the audience’s eyes with an unapologetic, confident gaze. Although the photographer behind the camera is usually considered to wield the authority commanding a composition, this man subverts traditional ideas of the power relationship between those who observe and those who are observed. With his eyes narrowed in distrust and a smirk playing at the edges of his lips, he is the one evaluating the camera and drawing his own conclusions. He is anything but a passive subject to the camera’s agency. We feel his scrutiny, as mysterious and intangible as the smoke dissipating from his cigarette, and are overwhelmed with the disconcerting sensation of vulnerability.

What do you think he is thinking of? Article Name
The Stare with Yaman Ibrahim
Description
With his eyes narrowed in distrust and a smirk playing at the edges of his lips, he is the one evaluating the camera and drawing his own conclusions. He is anything but a passive subject to the camera’s agency.
Author
Heeyoung Sim
Publisher Name
Pixelle.co
Publisher Logo