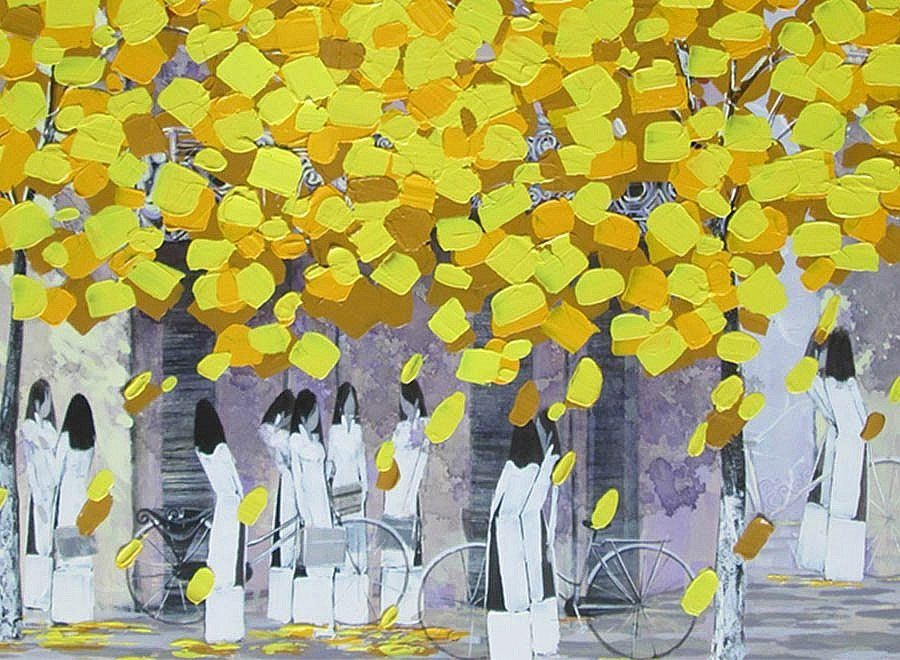 Xuan Khanh Nguyen bases his art on memory – the ethereal worlds that people carry within their subconscious but are nevertheless rooted in real life. His paintings emit an understated dreaminess that is comforting despite the surreal scenes themselves. Many of his works depict trees with Vietnamese schoolgirls in traditional ao dai clothing lurking under the shadows. Nguyen uses vivid colors on more neutral backgrounds to emphasize the contrast between the carefree beauty of the trees and the dark mysterious figures. His works are also heavily dependent on texture. Nguyen varies the thickness of the paint to create depth – his works are consequently more reminiscent of collages than two-dimensional paintings.

This painting, titled After School Time, is one example of his characteristic depiction of Vietnamese schoolgirls underneath vibrant trees. The radiant yellow of the leaves emits a carefree exuberance. The way Nguyen seems to have dabbed on the brightest yellow to emphasize the thickness of the paint makes the leaves quite literally pop out at the viewer, in contrast with the flat and darkened figures loitering in the shadows with their bicycles. The people are ghostlike and vaguely eerie – their black hair and white ao dai seem out of place on the otherwise vibrant canvas, though this severe monochromatic contrast is softened by the lilac shadows. They raise multiple questions. Who are they? Why are they gathered underneath the trees? The title makes it clear that they are merely schoolgirls talking to one another after their classes, but they nevertheless retain their aura of mystery.