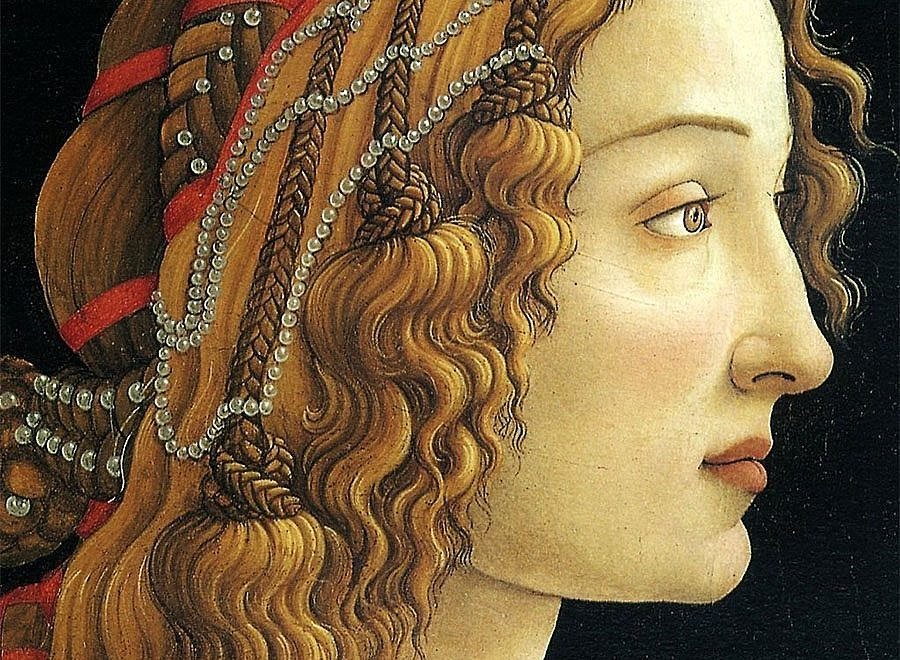 Sandro Botticelli dedicated his life to art and is remembered now as the artist whose works define the linear style of the Early Renaissance. He was born in Florence, and, refining his craft at an early age, he began an apprenticeship with a practiced painter at fourteen. Though Botticelli despised the notion of marriage, claiming that it gave him nightmares, he admired Simonetta Vespucci, a married noblewoman whose likeness is the subject of this portrait, for her gentle nature and her beauty. In this piece, Botticelli captures an idealized version of his muse, portraying her as a mythical creature and a beacon of light.

Vespucci died at the age of twenty-three, long before Botticelli created this painting, but Botticelli manages to bring her back to life through her image as a nymph or a goddess. In this painting, Botticelli adorns Vespucci in beads, feathers, and an elaborate hairstyle, which were not common styles of dress in Florence at the time. Botticelli paints her as a magical being to emphasize Vespucci’s extraordinary presence which persisted in Botticelli’s life once she had passed away, just as nymphs and goddesses are said to be mystically ever-present in nature. Her being is so far-reaching that it extends past the grave into Botticelli’s world and, with the help of this painting, into our world as well.

The darkness surrounding the noblewoman might represent the void in Botticelli’s life left by Vespucci’s death, the darkness of death in general, or the cruelties of mankind and the everyday evils people face in life. Regardless, she softens the intensity of the darkness by standing in between the darkness and us. Looking to her left with a gentle gaze, she is unfazed by the darkness and uninterested in the viewer as an individual. Perhaps, Botticelli intends for us to know how he felt being enlightened by her presence and never being object of her affection or the true focus of her attention. Or Botticelli could be prompting us to seek new inspiration, to turn our heads from Vespucci and find our own “goddess.”

Have you found yours? Article Name
Botticelli's Goddess
Description
Perhaps, Botticelli intends for us to know how he felt being enlightened by her presence and never being object of her affection or the true focus of her attention.
Author
Alyssa McGillvery
Publisher Name
Pixelle.co
Publisher Logo