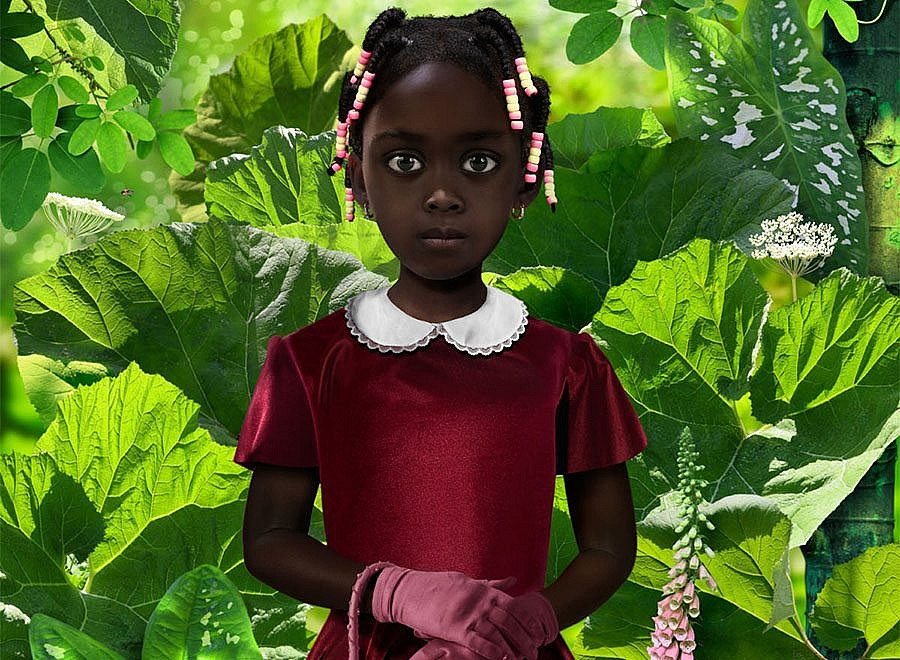 Ruud Van Empel is a Dutch visual artist, who creates digital collages with photography and Photoshop that are beautiful and somewhat unsettling. This is the twenty-eighth piece of Van Empel’s World series, which features black children, usually dressed in 1960s Dutch middle-class clothing, surrounded by a flawless tropical paradise. With this image, and its fellow images in Van Empel’s World series, he revolutionizes the portrayal of black children in the Western world. Before this series, the Dutch (and most other Western countries’) media depicted black children as poor, sick, and malnourished, without the self-evident innocence of iconographic white children. With this image and the others in his World series, Van Empel uses fragments from photographs of nature and of children to produce a picture of innocence that is both beautiful and eerie.

The vegetation, the girl, and the sunlight peering over her never existed in one moment. The plants belong to separate photographs, the girl’s facial features and body belong to different children, and the sunlight comes from a separate photograph as well, blending in this piece at Van Empel’s discretion. The image is purely his vision of innocence. Because the greenery is full of life and vitality, it serves to further the sense of youth and purity viewers get from the girl. It is a world of goodness that is uninfluenced by societal conventions, prejudice, or damage. The girl stands in front of the vegetation, looking at the viewers with her doll-like eyes, forcing them to ask why she is in that world: Does the girl beckon viewers into the paradise? Will she guide them through it, into a better understanding of innocence in a colorful world? Is she merely resident in that world? Or is she protecting it from the viewers because they will never belong in that paradise?

There is a sense that something unnatural is at play in the image, complicating the image’s depiction of an undeniable innocence. The near perfection of the image could be the cause. The girl and her surroundings look as though they could exist in reality, but knowing that the girl’s face and body are composed of a blend of several faces and bodies in an effort to create the perfect incarnation of innocence is unnerving. Nevertheless, Van Empel must create these flawless worlds from pieces of reality because they emphasize reality’s faults and suggest that this perfection is possible.