The Art of Street Graffiti with Ratur 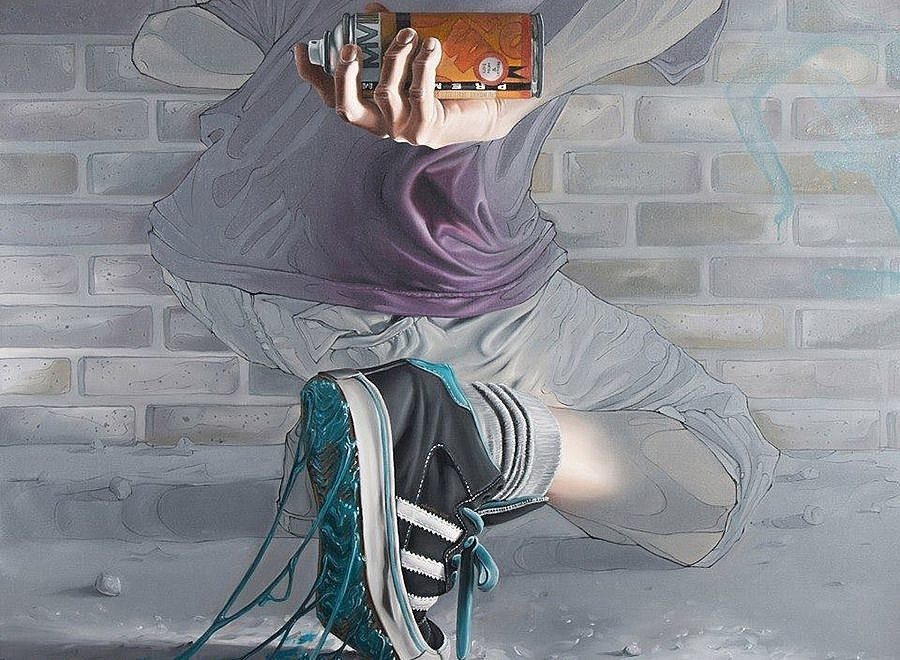 Born Arthur Maslard, Ratur is a French grafitti artist who works with traditional outdoor spray-paint and paint on canvas, as well as digital media. It was while pursuing his degree that he met graffiti artist Madkow and began his first works of street art, eventually going on to found the MV3 crew with brother Sckaro and devoting himself fully to the graffiti style. The unique, illustrative quality of Ratur’s work quickly set him apart from other graffiti artists: he has decorated playgrounds and skate parks across France with his stunning, larger-than-life works and has even been commissioned to create vinyl record covers for bands such as Acoosmik. In 2010 his work was exhibited at La Maroquinerie in Paris, gaining street art rare official recognition from the artistic community, and in 2014 was featured in an exhibit at 1AM in San Francisco.

This piece, titled Le chat et la souris (Cat and mouse), is created with oil paint on canvas and is one of the works from his 1AM exhibit in San Francisco. The subject seems to be a fellow graffiti artist with his back turned to the audience, his identity left unknown. While most of the piece is painted in monotonous, unassuming shades of gray and beige, the artist’s hand, bottle of spray paint, and shoe are painted with vivid colors and painstaking detail. This contrast symbolizes the excitement and energy of the world of street art as opposed to the mundane drone of daily life. The artist’s hand is painted with a particularly strong contrast between light and shadow, bringing it forward as the center of visual focus and highlighting the power and control that it holds. With his finger poised on the nozzle, the artist has complete autonomy over creation; freedom to conjure up whatever image he may wish and, judging by his stealthy pose, on any surface he may wish. A sticky, viscous teal liquid – perhaps paint – drips from his shoe and leaves a footprint, marking his presence despite his clear attempt to be covert. This is perhaps a statement on the dichotomous nature of the street artist: he prefers for his work to be a mystery, appearing on buildings and sidewalks without warning, yet each artist’s distinct style unmistakably marks his presence.

Ratur has painted his subject in a moment suspended – crouched low in preparation to spring over the wall, muscles tensed with anticipation. Is he hiding from someone, perhaps those who criticize graffiti as vandalism rather than a genuine art form? Or is he lying in ambush, waiting to steal a moment with an alluringly empty wall?

Street artists risk their lives to paint the sky of this urban jungle. 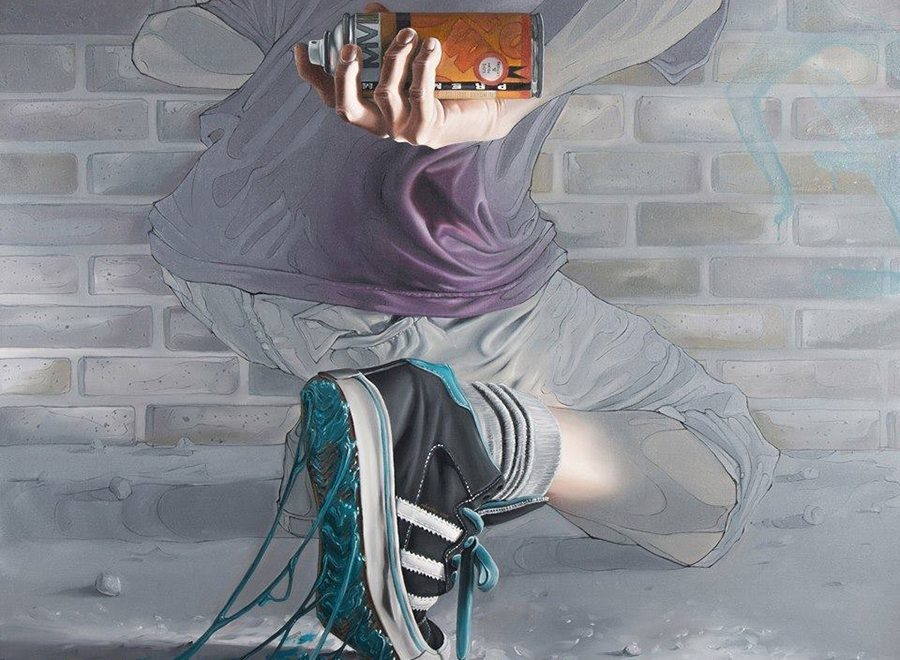 Article Name
The Art of Street Graffiti with Ratur
Description
This contrast symbolizes the excitement and energy of the world of street art as opposed to the mundane drone of daily life.
Author
Heeyoung Sim
Publisher Name
Pixelle.co
Publisher Logo