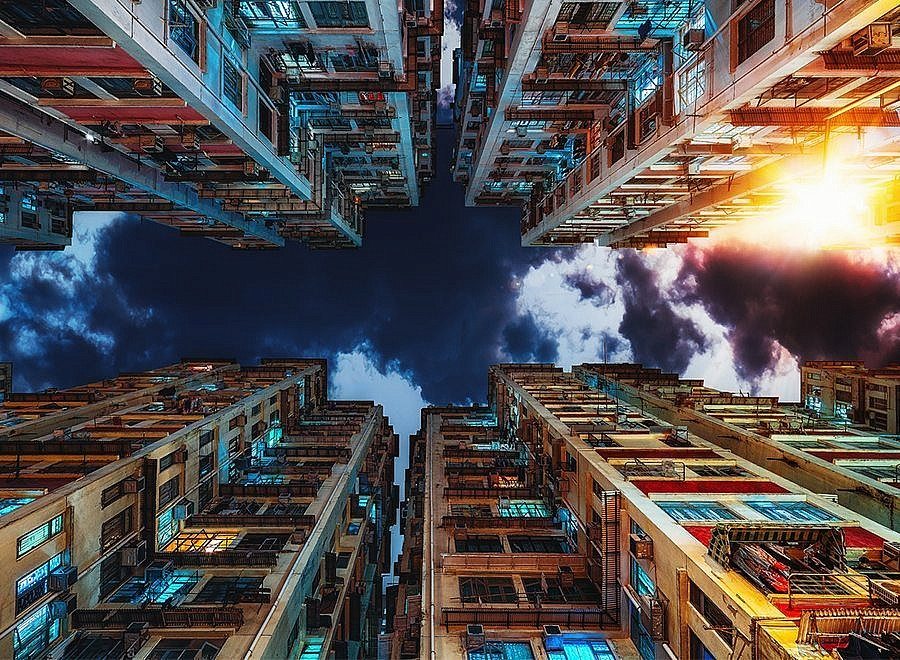 Peter Stewart’s travel photography transports the viewer into another place and time. In this photograph, Steward captures the overwhelming enormity of Hong Kong’s urban landscape in an image that is as impressive as it is disorienting. The colossal skyscrapers frame the top and bottom of the image, leaving just a sliver of space opened to reveal the tantalizing sky. As a result, the heavy horizontals and multiple levels create a three-dimensional effect as the center of the composition draws the viewer’s eye towards towards a point somewhere in the infinite distance. This mind trick makes the flat, two-dimensional photo appear as if it were thrusting upward into the sky; therefore, the physical limitations of the photograph are at odds with the visual scene it depicts. This incongruity extends to the way Steward juxtaposes the feeling of being trapped by the buildings with the freedom promised by the open sky.

The buildings are stacked and angular, yet perfectly uniform like urban legos. Although the cement gives them a cold, industrial feel, light coming down from the sun and through the windows bounces around and gives the skyscrapers a lively feel. This light from within the windows hints at their inhabitants, tauntingly raising the question of who is inside. We suddenly realize that these inhabitants must have a completely different visual experience than ours—inside of shafted rooms with an only view of the opposing building. The viewer’s perspective, conversely, begins from the bottom of the buildings and makes its way upward. While the inhabitants feel trapped inside their metropolitan box without any sight of reprieve, the viewer stares straight into open freedom.

A symbol of salvation, the sky offers a window into the world beyond bustling Hong Kong. However, instead of a traditional beautiful blue, this sky is slightly dark and gloomy, hinting at a sense of fleeting optimism that is exacerbated by the suffocating urban landscape. Although the vertical buildings extend only to a certain height, the horizontal sky spreads out indefinitely, and Stewart taunts the viewer with the desire to see past the tops of the buildings and into this unconfined space. Through his photograph, Stewart illuminates how cities can become an isolated microcosm of its inhabitants, insulated from the outside world with their gate-like skyscrapers with only the most superficial access to nature. 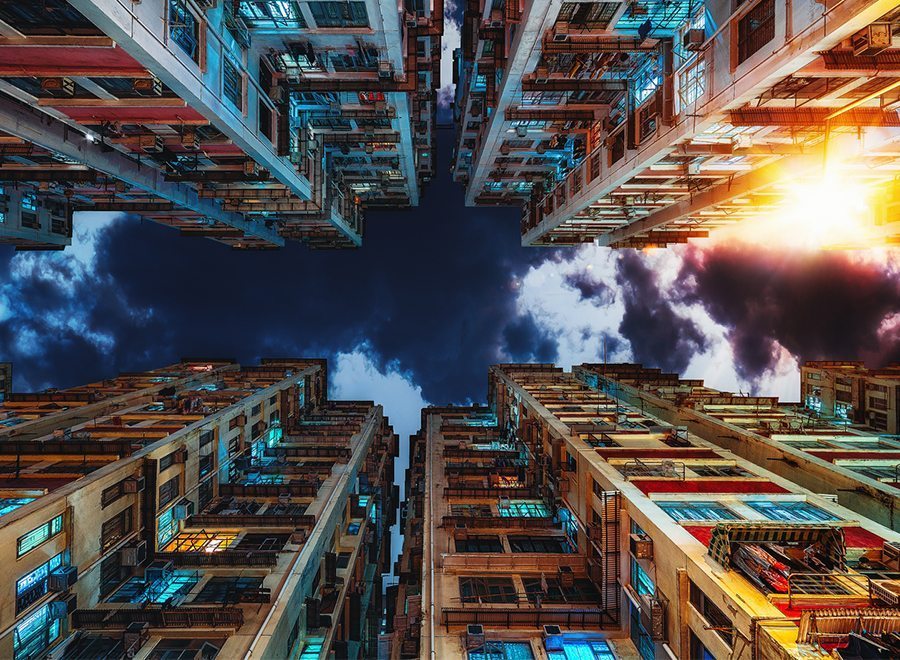 Article Name
Peter Stewart's Sky
Description
Although the vertical buildings extend only to a certain height, the horizontal sky spreads out indefinitely, and Stewart taunts the viewer with the desire to see past the tops of the buildings and into this unconfined space.
Author
Hillary Gabriele
Publisher Name
Pixelle.co
Publisher Logo