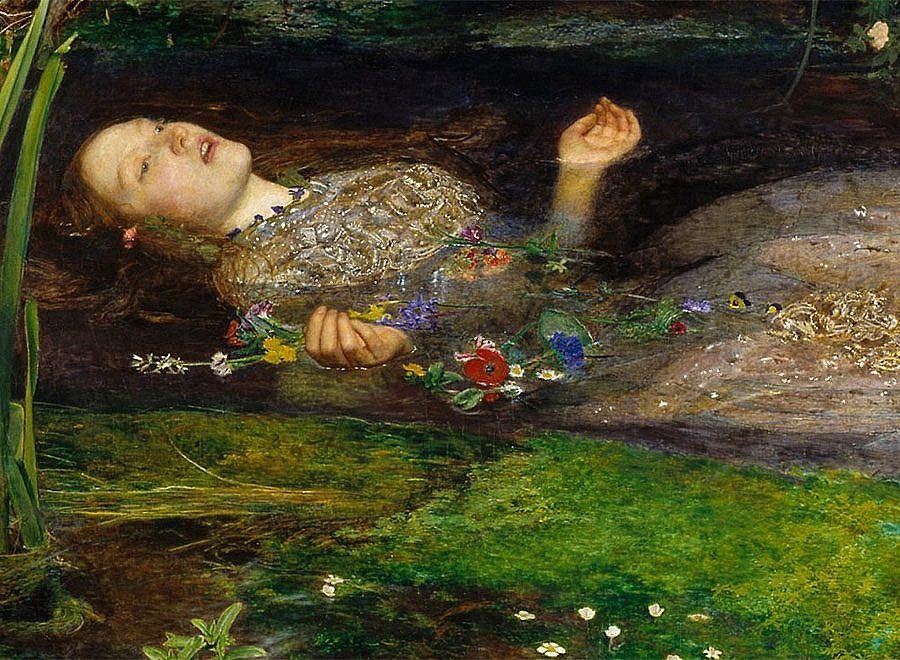 Ophelia is a tragic character who has inspired artists for centuries since she was created by William Shakespeare as Hamlet’s young lover. After he scorns her, she goes mad with grief, falling into a river while picking flowers on the shore. She lies in the water, deliriously singing old songs while the weight of her dress drags her down to her death. John Everett Millais’ painting is seen as a symbol of young love corrupted, a famous example of the dark romanticism of the Pre-Raphaelite painters.

Millais’ Ophelia depicts this scene of doomed innocence in the moment before Ophelia drowns. The gold and silver folds of her dress float around her, becoming one with the water. Her scattered flowers are like a funeral wreath. Millais was known for his attention to detail; he fills Ophelia’s bouquet with red poppies – a symbol of death – and a necklace of violets – a symbol of fidelity. The delicate petals and foliage shrouding Ophelia and the flowers embroidered into her dress seem to symbolize the bloom of her short life, so quickly extinguished. In her last moments, she is almost absorbed back into the nature around her. She stares upwards without seeming to see what is in front of her, perhaps lost in thoughts of Hamlet.

In Ophelia, he portrays the world as is often is in reality: a tragic playground where death and beauty are too often intertwined. His embrace of the decay in his surroundings reflects the theme of the painting itself: the destruction of a character seen as a symbol of purity. He takes the traditional portrait format and turns it on its head, reminding us of a lesson often learned by observing the plant and animal world: life can be both beautiful and incredibly vicious at the same time. When exploring the wild, we witness the splendor of flowers and colorful animals, but we cannot overlook the weaker animals being singled out by predators for brutal slaughter. Nature is not a place where the fragile are protected; and although we may sometimes forget it, humans are also part of nature.