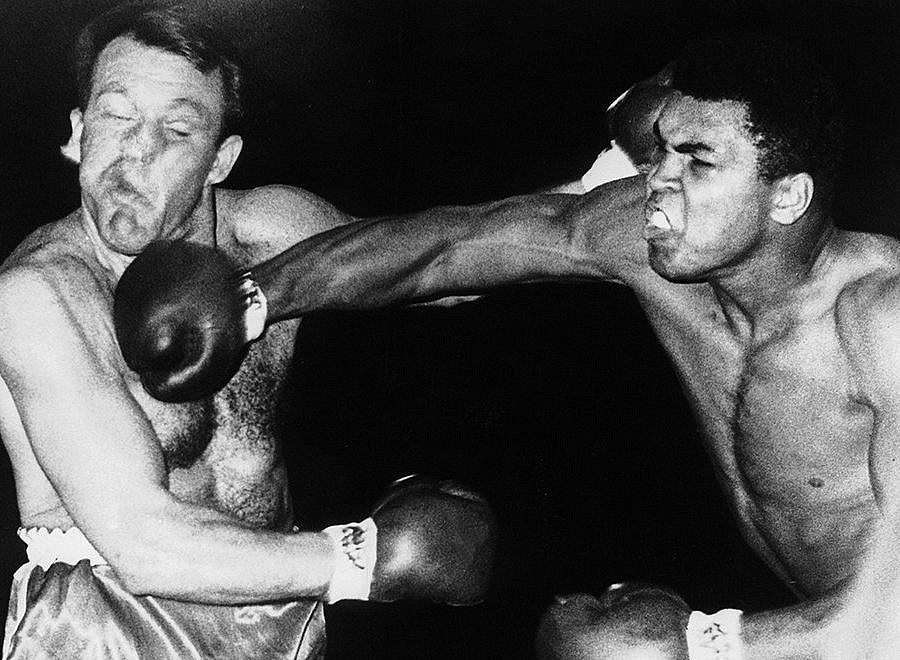 A serious sign of personal and professional trouble came when the recently-crowned heavyweight champion was denied a fight with Ernie Terrell in Chicago. For the first time, in 1966, Muhammad Ali faced direct systemic and bureaucratic opposition due to his personal beliefs – specifically, for joining the Nation of Islam. Around the same time, he was reclassified by the Louisiana draft board as 1-A, or fit for the military conscription, a political duty he fundamentally rejected. As popular criticism heightened over his religious, political, and racial stances, and as he struggled to secure fights, Ali found recourse in a brief exile from the United States. This was the context in which, for the next year, he would fight the likes of George Chuvalo, Henry Cooper, and Brian London (pictured here) in Toronto and London.

Yet it would be inaccurate to say these challenges came as an unheeded surprise. Before the Terrell cancellation, Ali stood against former champion Floyd Patterson. Much more than a title defense, the fight was a battle of beliefs. Patterson established from the start, “This fight is a crusade to reclaim the title from the Black Muslims. As a Catholic, I am fighting Clay (he persisted in calling Ali by his birth name) as a patriotic duty.” In response, Ali called him an “Uncle Tom,” an epithet for a submissive race-traitor, and by most accounts, went on punish Patterson in a mercilessly dragged-out 12th round TKO. At the very least, the personal attacks and administrative battles brought back his self-described recollections of racism and injustice growing up. Unsurprisingly, then, at the peak of criticism and backlash against him, Ali resiliently fought back. His international opponents fell, one by one, like dominoes.

In this photo, Ali drills his fist into London’s cheek. The image is a powerful statement on Ali’s boundless strength in a time of intense personal struggle, and it is a fitting representation of his more active racial, political, and religious leadership in the years to come. London, having been defeated by Cooper and Patterson, came in as the heavy underdog with 15-1 betting odds against him. Ali admitted the winner’s purse was a greater incentive for him than the boxing challenge. Still, the resolute determinism on his face as he pounds away is inspiring. The stunning black and white shot captures the champion, face clenched in serious focus, arms flexed menacingly, beating away his opponent in the ring, but also those outside of it.

How do you feel about this photo, Ali, and his legacy? Article Name
Muhammad Ali vs Brian London
Description
The image is a powerful statement on Ali's boundless strength in a time of intense personal struggle, and it is a fitting representation of his more active racial, political, and religious leadership in the years to come.
Author
Usman Akhter
Publisher Name
Pixelle.co
Publisher Logo