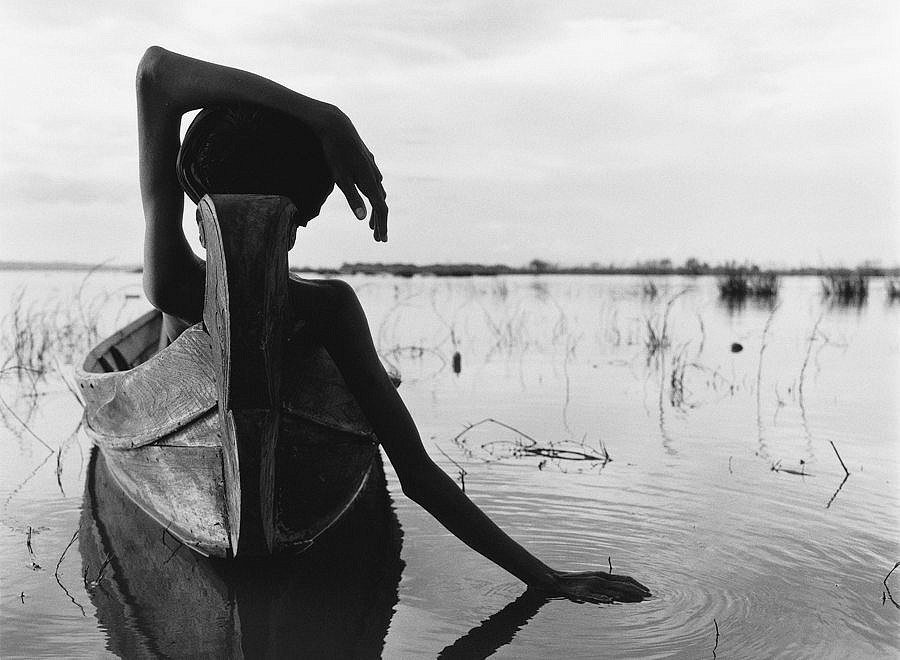 Monica Denevan is an American photographer whose works largely feature natural landscapes and men of ethnic groups from her travels through Burma. Denevan utilizes a simple roll film camera to capture her images in a classic black-and-white format, echoing the resemblance she observes between the country’s pristine scenery and the simplicity of early twentieth century images. She strives to accurately represent the beauty of the country, showing her audience another side of Burma that is distinct and separate from the negative images frequently portrayed in the media.

This subject of this photo titled “Content in the Shallows” is a Burmese man reclining idly on a wooden boat on a still lake. One hand perches languidly upon his head while the other slightly grazes the surface of the tranquil water, creating a pattern of unbroken ripples. A few reeds and shrubs dot the otherwise barren landscape. The monochrome tones used in the image minimize background distraction and cast the man under a dark shadow, causing his silhouette to stand in sharp relief from the light sky and the shining surface of the lake. The photographer’s positioning of the camera allows the man to occupy the majority of the scene, signifying the importance of his presence in the largely empty landscape.

The image provides the viewer with an embodiment of serenity: whether it is the man or the lake, all is still. The man’s relaxed position and the stillness of the waters surrounding the boat indicate that the boat is anchored in place, establishing the man as an static, seemingly permanent fixture of this natural scenery. The man and nature are at peace with one another, and the reflection of the man’s arm symbolizes the harmony of this union. Reclining as he observes the sky and the scene spread before him, the man is apparently content to remain alone with nature, uninterrupted by the distraction of daily human life. In a world of man-made construction, this one untouched sanctuary remains. The man has made himself a home within the wilderness of nature, admiring its beauty without feeling the need to alter it. He has found stillness, and within it he rests.

How does this picture make you feel?

Article Name
Contentment with Monica Denevan
Description
Reclining as he observes the sky and the scene spread before him, the man is apparently content to remain alone with nature, uninterrupted by the distraction of daily human life.
Author
Sarah Wang
Publisher Name
Pixelle.co
Publisher Logo