The Beach with Max Dupain 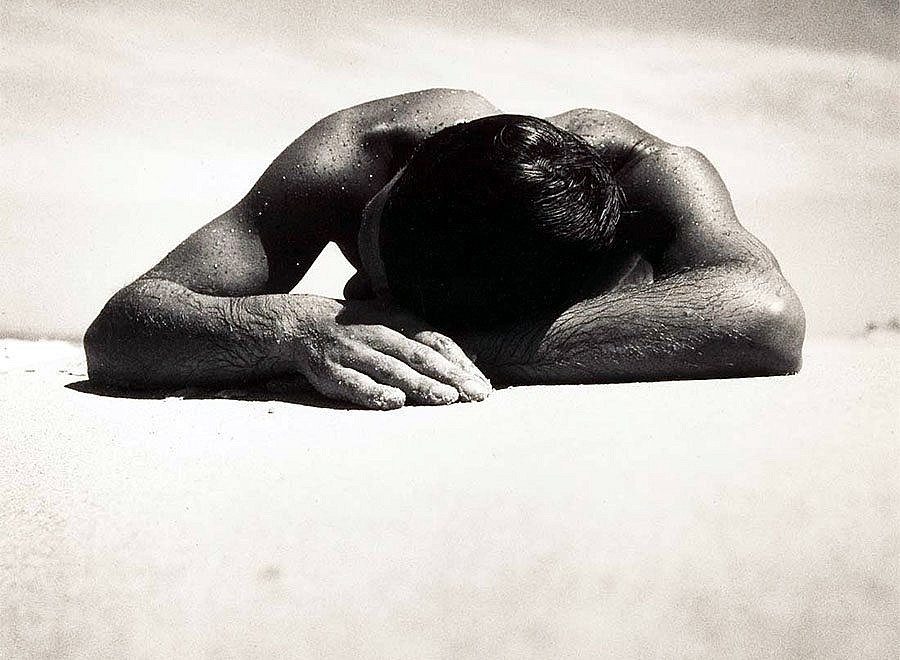 Maxwell Dupain was one of Australia’s most renowned black and white photographers of the twentieth century. Though his works spanned a vast range of photographic genres—including landscapes, still life, and architecture—he is best known for his photographs of Australian beach culture. Dupain’s works are characterized by a simplicity and clarity stemming from his emphasis on sharp focus, boldness, and minimalist background.

This photograph, entitled “Sunbaker,” is Dupain’s most famous piece. The sand and the sky are so bright that one might almost think that the photo was overexposed: with few details to distinguish them, the two merge into one with only the slightest of lines providing a dividing barrier. The lack of detail present in the background only serves to further highlight the minute examination of the subject presented by the camera. The lens calls into focus the lingering droplets of water clinging to the man’s skin from a swim in the ocean, his relaxed posture as his muscles rest languidly on the sand, and the light of the sun radiating off of his back. The photograph bestows a sense of warmth upon the viewer: even without a distinct background, one look at the subject suffices to bring the viewer to the seaside on a scorching summer day.

A sense of peace and harmony arises from the man’s contentedness to lie on the beach, basking in the glorious rays of the sun. The man, however, symbolizes more than an idle beachgoer indulging in nature’s offerings. Rather, he himself is a fusion of the primal elements of nature. He touches both the sand and the sky, the caress of the ocean’s water remains on his skin, the sun illuminates him: the subject is in contact with all these elements and serves to bring them into a harmonious union. Simultaneously, nature brings the subject to life and defines him as a “sunbaker,” providing him with an identity for the viewer. The man is distinguished from the beach around him, but at the same time, he is the beach; he embodies its warmth and its serenity, drawing energy from the water and the sands. The man’s harmony with nature speaks to all humans’ capacity to unite with the natural world if they only lay still and feel the pulse of its elements interacting. In the image, all is one, and the viewer, too, might imagine themselves lying just across from the man, inches away: one never has to reach far to touch the subject’s hand and become one with the powerful tranquility residing in the beach and in oneself. Article Name
The Beach with Max Dupain
Description
The man is distinguished from the beach around him, but at the same time, he is the beach; he embodies its warmth and its serenity, drawing energy from the water and the sands.
Author
Sarah Wang
Publisher Name
Pixelle.co
Publisher Logo