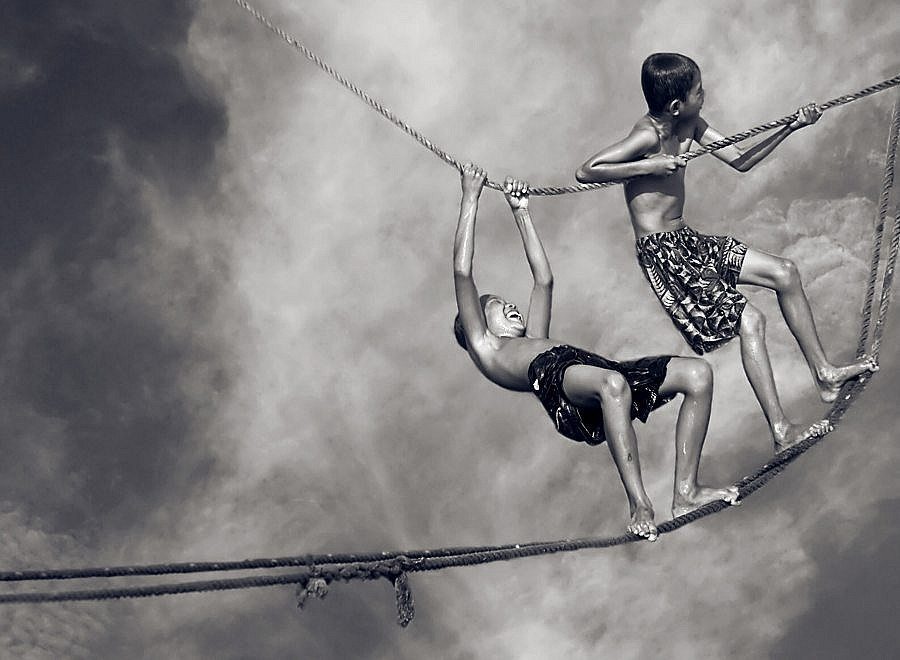 Hengki Lee is a visual artist and photographer from Jakarta, Indonesia whose unique, quirky style encapsulates the emotion of human interaction with nature. He often features whimsical scenes such as children at play or the outline of a figure leaping through the sky against an exaggeratedly large, bright full moon. This whimsical quality is further augmented through editing techniques such as strategic blurring, theatrical silhouettes, and high-contrast black and white compositions, which elevate his photographs to the realm of the dreamlike or surreal. The use of black and white simplifies the photographs, allowing the viewer to focus on the subjects’ interactions with their surroundings by stripping them of extraneous details and showcasing their forms in their most raw and unadulterated states. In this way, Lee’s photography is able to express both poignant moments of stillness and the constant motion and growth of life.

This piece, titled To The Limit, exists in both color and black and white. While the color version evokes a sense of playfulness, the black and white version conveys a more complex and dramatic feel. Two young boys balance precariously on a makeshift tightrope against the inexplicable background of clouds and sky. Both have their heads turned away, concealing their identities from the viewer – although one of them clearly displays a broad, earsplitting grin as he dangles from the rope. Judging from their heavy swim trunks and slicked down hair, the boys are presumably playing at the edge of a river or lake, yet the absence of a clear physical setting makes it look as is they are climbing through the very sky itself.

The simple act of placing the subjects out of context – against the stretch of the sky rather than over a body of water as would logically be assumed – makes the moment seem like a scene out of a fantastical dream rather than from reality. The boys look suspended in the air, careless and laughing as if on some dashing and dangerous quest to discover a castle in the clouds. The unexpected background seems to represent the boundless expanse of their imaginations. Whatever realities the boys must live in and whatever hardships they may come to face later in life, for now they envision themselves floating in midair, tethered to the earth by a single rope bridge as they traipse on in the most perilous and spectacular of journeys. They are unencumbered by the limits of daily life as they swing on the edge of boyhood. Hengki Lee has captured a simple, yet amazing moment of pure freedom. Article Name
To the Limit by Hengki Lee
Description
They are unencumbered by the limits of daily life as they swing on the edge of boyhood. Hengki Lee has captured a simple, yet amazing moment of pure freedom.
Author
Heeyoung Sim
Publisher Name
Pixelle.co
Publisher Logo