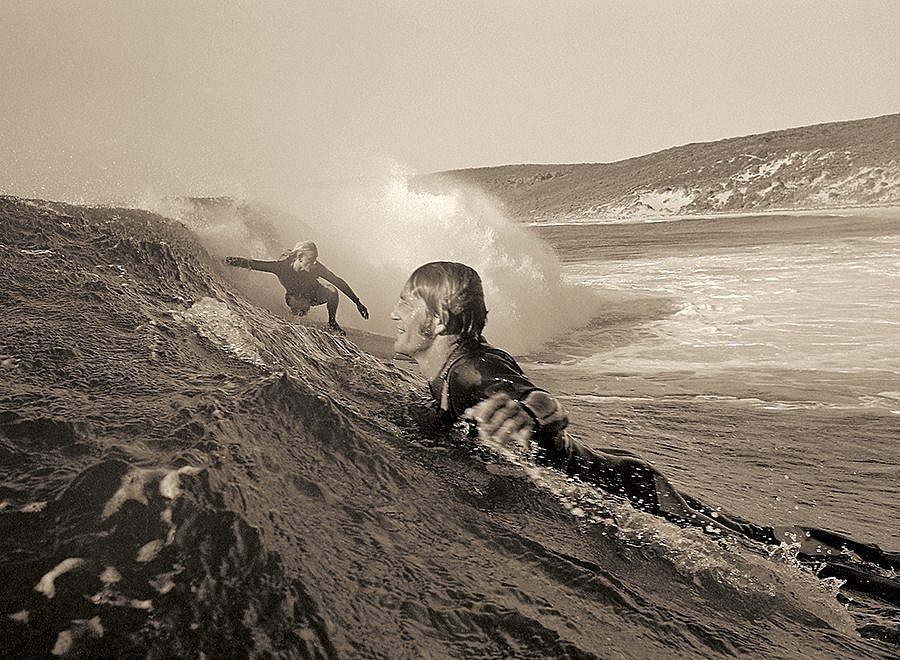 John Witzig is an Australian surf photographer and journalist from Sydney who captures his photos by swimming next to surfers and snapping shots with a water camera as the waves break. He has championed both surf photography and journalism since the birth of the alternative culture created by the surfer community in the 1960s and 1970s. Witzig’s photography opens a window into the past, revealing the freedom, and adventurousness of the classic surfer.

In this particular photograph, Witzig focuses on the interaction between the surfers and the waves, bringing the two together to invoke the true emotion behind surfing in the viewer. The water acts as a symbol for life and the future: people can fight against the water’s movements and exhaust themselves—challenging the elements of life that are out of their control – or they can ride the waves and experience something enriching, embracing life as it comes. Though the surfer at the center of the image is paddling up the building wave, he doesn’t view the wave as an obstacle. He tackles the wave with confidence, embracing the journey that lies ahead, whatever it may entail. The willingness to embrace the waves and to welcome life with optimism is a defining feature of surfer culture.

The water surrounds the surfers in the image without managing to overwhelm or limit them. The waves are at times building or crashing, but both are equally constructive to the surfers because both are parts of the movements of the waves that allow them to ride. From what the viewer can see, both surfers have their arms open, reflecting their open minds and open hearts as they take on the waves. There’s a receptiveness in the surfers to the world around them that viewers might find nostalgic, reminding them of the innocence and freedom found in youth. Surfers do anything but shy away from the callings of the waves—the callings of their passions, lives, futures, destinies. Whether they are climbing a wave or riding it, they remain open to the entirety of the journey that it brings.

How does this photograph make you feel? Article Name
John Witzig's Optimism
Description
He tackles the wave with confidence, embracing the journey that lies ahead, whatever it may entail. The willingness to embrace the waves and to welcome life with optimism is a defining feature of surfer culture.
Author
Alyssa McGillvery
Publisher Name
Pixelle.co
Publisher Logo