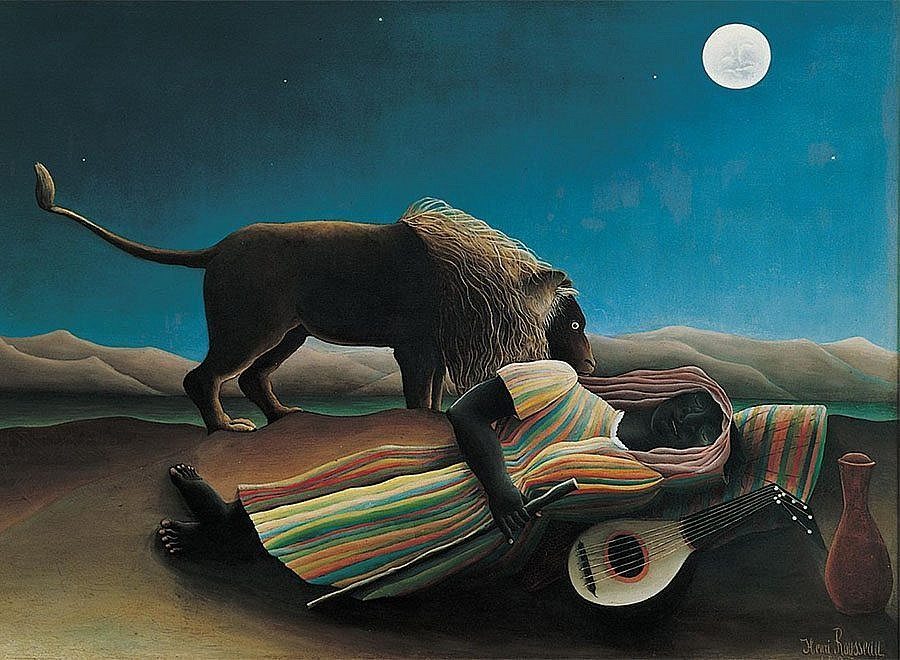 The work of French Post-Impressionist painter Henri Rousseau is often characterized by depictions of wild jungle scenery and the dangerous animals that inhabit such places. In this painting titled “The Sleeping Gypsy”, however, Rousseau parts with the dense canopy of the jungle in favor of the vast emptiness of the desert. This setting allows him to create a scene that is fraught with both intense danger, and quiet contentment.

Rousseau’s flat, simplistic style of painting named naïve art creates a distinct outlining effect that allows the two central figures of the painting, the lion and the gypsy, to stand in stark contrast with one another. While the lion seems to almost blend in with the desert background, every feature of the gypsy seems to stand out and clash with the desert. The vibrant colors of her clothes stand out among the dull, muted colors of the sands that surround her. She seems alarmingly unprepared for such a harsh setting, as she only seems to be traveling with a mandolin and a small water container. While the lion stands wide awake with a fixed stare, the gypsy slumbers peacefully, her lips seeming to curve into the slightest of smiles, betraying a subtle sense of contentment. Through the sharp contrasts that he has established, Rousseau seems to be suggesting that such contentment is only possible in a place such as the desert when one is blissfully unaware of the dangers, as indicated by the gypsy’s lack of supplies and her deep slumber.

At first glance the lion appears to be one of these dangers of the desert, as he is stealthily perched over the sleeping gypsy, cloaked in dark shadow, the visible parts of him nearly blending in with the monochrome of the desert background. He could be nearly invisible were it not for his most distinctive feature: the green eye that seems to glow in the night. It is as bright as the moon and its unblinking stare displays an alertness that could only come from surviving the harsh landscape. The lion seems to be using the unending stare of its bright green eye to watch over the gypsy, protecting her from any dangers that might lurk about. Article Name
Rousseau's Stare
Description
Through the sharp contrasts that he has established, Rousseau seems to be suggesting that such contentment is only possible in a place such as the desert when one is blissfully unaware of the dangers, as indicated by the gypsy’s lack of supplies and her deep slumber.
Author
Alex Winks
Publisher Name
Pixelle.co
Publisher Logo