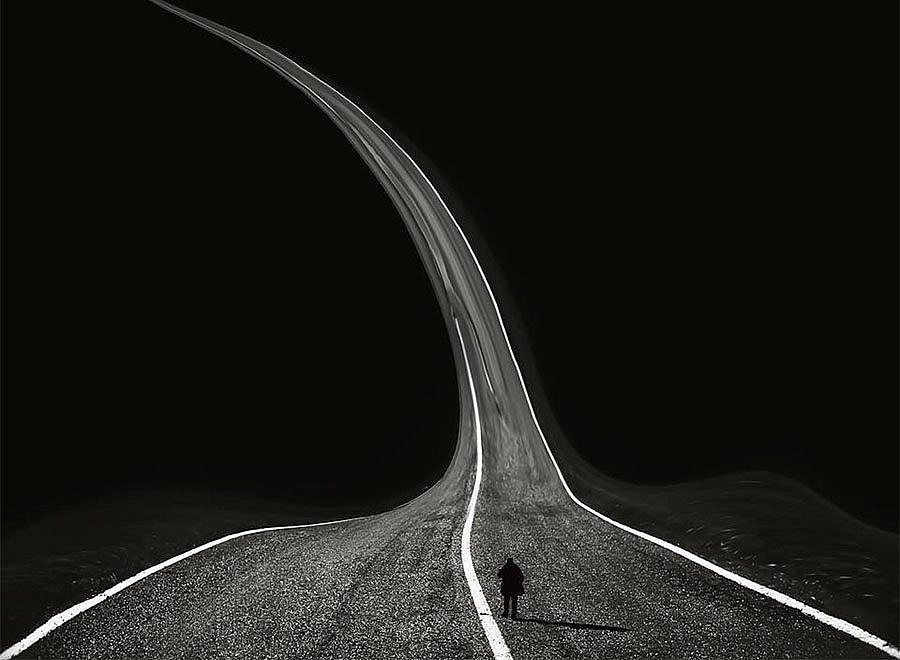 The work of photographer Filippo Rizzi often explores the complexities of light and shadow while remaining in a very muted palette of color. Such characteristics allow his photographs to convey very specific moods and emotions. In this photograph, titled Wrong Turn, he uses them to convey the feeling of being utterly and completely lost.

The image is dominated by a near total absence of light that results in the long, winding road and its lone traveler being the only objects visible within the frame. The scale of the image, which portrays the traveler as minuscule in comparison to the great unknown by which they are surrounded, creates a palpable sense of disorientation and isolation. This isolation of the road and the traveler from any type of discernible setting serves to emphasize the traveler’s connection to the road and his or her journey. While the surroundings are unknown and alienating, the road itself provides a modicum of familiarity to the traveler that prevents him or her from being totally lost in the sea of darkness that takes up most of the frame.

Though the theme of this image seems to be the confusion and apprehension of travelers who have strayed from the known path, the winding road itself symbolizes a kind of determination, or perhaps predestination. The traveler does not make the road: it coils on into the darkness of its own accord, leaving the traveler no choice but to pursue it unto its end, wherever that may be. The lone traveler is either approaching or leaving the world of reality we stand in as we gaze at the image. The image seems to reflect a deterministic view of life: after a choice is made, for better or worse, there is only one path to follow, though we may never know what lies at the end. Is the traveler ascending or descending? For him, as for the viewer themselves, whether this “wrong turn” will be a damning mistake or an unlikely stroke of fortune will only be known as the traveler continues walking down this path. Article Name
Filippo Rizzi's Path
Description
The image seems to reflect a deterministic view of life: after a choice is made, for better or worse, there is only one path to follow, though we may never know what lies at the end.
Author
Sarah Wang
Publisher Name
Pixelle.co
Publisher Logo