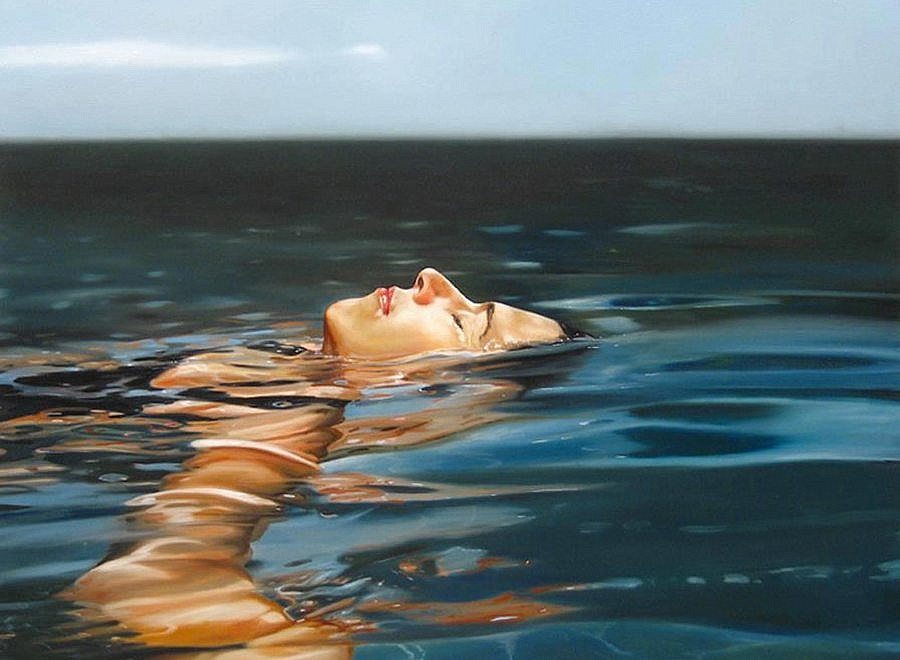 Eric Zener is known for his paintings depicting water and the powerful sway it holds over one’s emotions. He investigates the numerous narratives that can be created by water and other elements of nature: from the innocence of childhood to the fear of nature’s unpredictable potential for destruction. Zener seeks to portray the full spectrum of feelings that nature imprints onto the human psyche.

This piece titled “How to Disappear Completely” captures the tranquility of an afternoon spent by the beach – a respite from the humdrum of everyday life. The woman floats peacefully, weightless in the water. Every brush stroke captures the way the light dances along and is refracted by the water in meticulous detail. No ripple in the calm ocean is too insignificant for the painter to devote his attention to. The vastness of the ocean endows the painting with an ethereal quality. With only a small sliver of the horizon visible, the water seems to engulf the woman and wash away all the worries of the world. The clear quality of the water symbolizes boundless purity, further isolating the subject of the painting from this world and transporting her to a simpler place. The light illuminates every angle of her face, imbuing the woman with a sense of divinity.

However, the cool blue tones used in the painting also add an tinge of sadness to this scene and seem to suggest the woman’s isolation not merely from worry, but also from human warmth and affection. Despite her relaxed position, some unresolved tension remains in her brow, as though she is aware of the precarious position that she lies in. A single cloud in the clear sky suggests the possibility of an impending storm. Suddenly, the vastness of water is not comforting but oppressive: the same substance that lifts her up could in a single instant become the leviathan that mercilessly pushes her down into the endless darkness, engulfing her completely. All alone in these vast depths, the woman can seek no assistance from a fellow human: she is truly withdrawn from the mortal world. The woman’s predicament evokes both a sense of serenity and an uneasy twinge of fear at the capriciousness of the water that surrounds her, holding the fate of the subject prisoner to its slightest whims. Article Name
Water's Emotional Sway with Eric Zener
Description
However, the cool blue tones used in the painting also add an tinge of sadness to this scene and seem to suggest the woman’s isolation not merely from worry, but also from human warmth and affection.
Author
Sarah Wang
Publisher Name
Pixelle.co
Publisher Logo