Growing up with Mary Qian 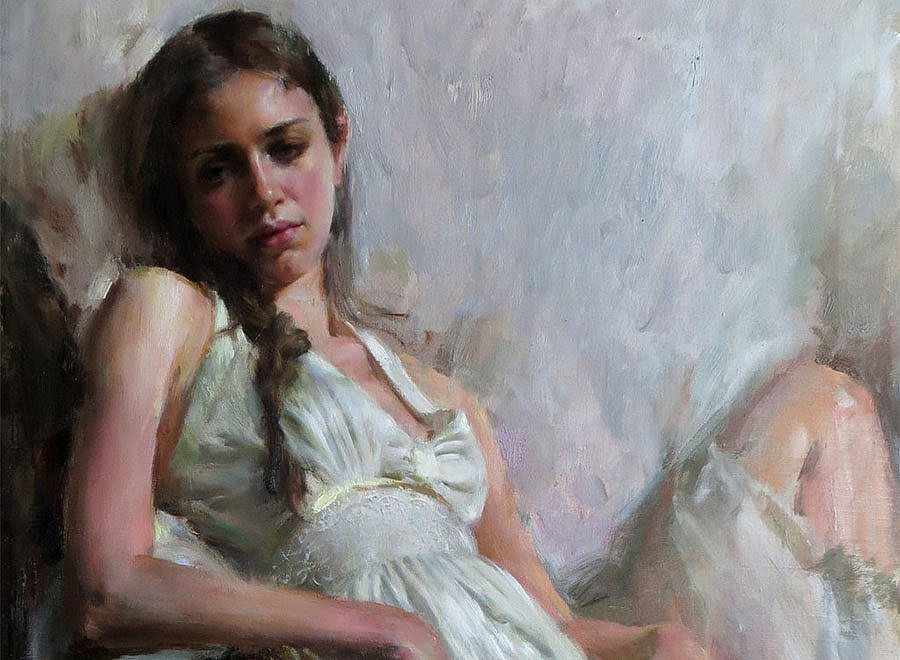 Mary Qian is an American Impressionist artist who focuses on the in-between moments, the lulls in conversation, and the pensive gazes when it is possible to read someone’s true emotions on their face. Often their unguarded moments are fleeting, but by capturing them with oil paints, they can be visited for years to come. The human spirit takes shape in an elegant and honest way in Qian’s paintings, which seem a world away from the rigid tradition of formal portraiture. There is a true emotional connection between the painter and her subject.

Qian was born in China and studied science for years while simultaneously pursuing painting independently. While she admired Chinese masters and calligraphy, she was more drawn to the expressive qualities of western painters she saw in the works of Rembrandt, Repin and Velazquez. Women at rest are the focus of many of her pieces, an interesting decision considering the historical implications of the feminine body in such a pose. In Qian’s skilled hands, her subjects regain autonomy that has long been manipulated by the male gaze. Viewers feel intimately connected to the subjects, the canvas often acting as a window into a kind of modern boudoir.

The subject of this painting, titled Gaze, seems to be moving through a period of transition. She is no longer a little girl, but her awkwardness in the lavish dress indicates that she has not yet reached maturity as a woman. She sits un-self-consciously seemingly tangled in the complex web of her mind as she shifts through what it means for one’s own identity to be thrown into flux with age. Those who have stood in her shoes know well the fear that so often accompanies uncertainty, which is inevitable when it comes to growing up. Adulthood invites opportunities and responsibilities, and the comfort of childhood is difficult to part with. The subject seems to long to retain whimsical and youthful sensibilities while preparing herself for the challenges ahead. Article Name
Growing up with Mary Qian
Description
Those who have stood in her shoes know well the fear that so often accompanies uncertainty, which is inevitable when it comes to growing up.
Author
Daniela Casalino
Publisher Name
Pixelle.co
Publisher Logo