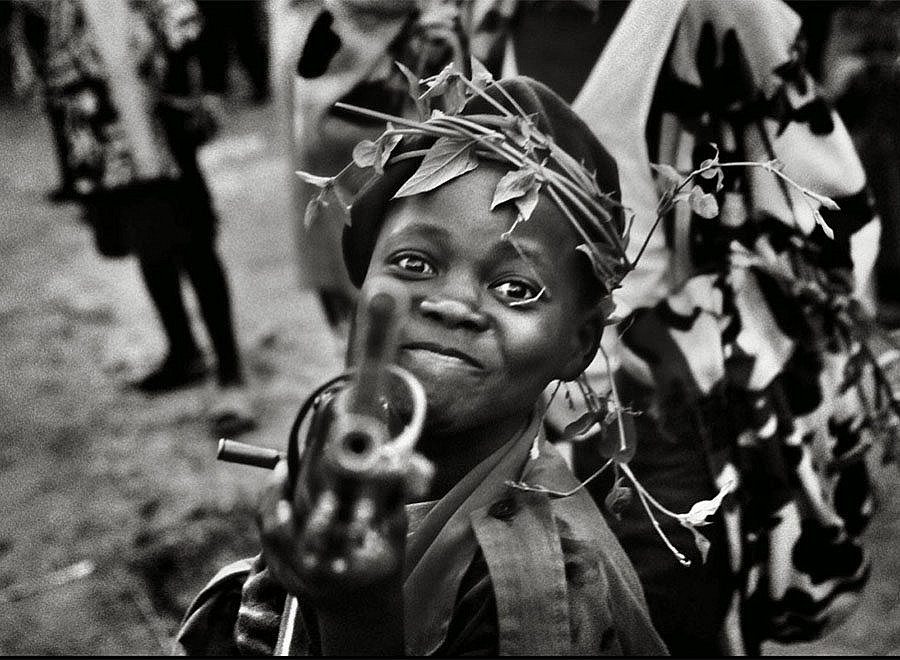 Award-winning documentary photographer Marcus Bleasdale has been shining a light on some of the humanity’s darkest endeavors through his photographs of the crimes and abuses of human rights since the late ‘90s. With a background in business and economics, he also uncovers the financial conflicts that contribute to the violence. In this photograph, Bleasdale introduces us to a child soldier, fighting with a Mayi-Mayi militia in Kanyabayonga, a town in the Democratic Republic of the Congo, which has suffered from violence and civil war since 1993.

Connecting with the viewer immediately, the child looks into the viewer’s eyes without fear. He seems to be filled with childish excitement. His weapon, pointed directly at the viewer, is not much smaller than he is, emphasizing the child aspect of this soldier. The boy wants to be free and explore, but, because of the failings of the society he was born into, he will never be able to do in a non-violent and healthy way. We are heartbroken as we foresee the price the violence of armed conflict will have on the child’s innocence and psyche.

Bleasdale’s photograph is in black and white, emphasizing that there is blatant right and wrong when it comes to human rights, and the employing of these child soldiers is absolutely wrong and tragic. The grayscale also contributes to the photograph’s otherworldly tone. Because stories of human rights abuse and crimes in Central Africa have been under reported in mainstream news, many people outside the areas of conflict do not have the violence of civil war present in their realities. Thus, when people see this photograph, they feel that it can’t possibly be something happening in the world in which they live. Knowing that it is reality increases the photo’s emotional impact. Bleasdale calls us to action.

How do you feel about this photo? Article Name
War with Marcus Bleasdale
Description
We are heartbroken as we foresee the price that violence will have on the child's innocence and psyche.
Author
Alyssa McGillvery
Publisher Name
Pixelle.co
Publisher Logo