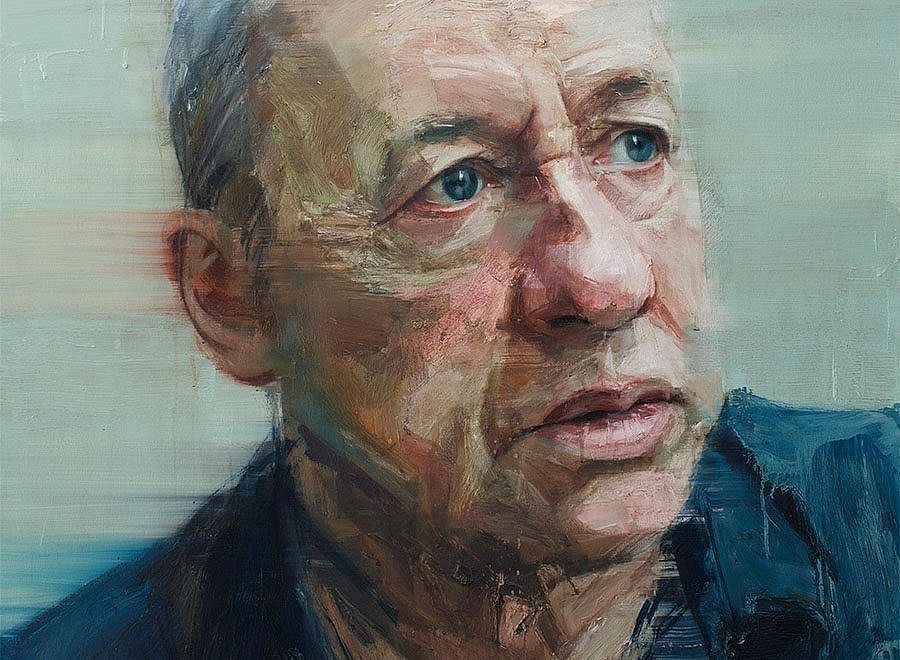 Colin Davidson is a textural painter, laying thick, robust strokes of oil paint on his linen canvases in such a way that mimics the wrinkles and ridges of human skin. The subjects of his paintings are often famous celebrities, from the reclusive folk singer Marketa Irglova to the international Hollywood superstar Brad Pitt. Yet his paintings portray a somber side of them that strips them of the protective façade of fame and bares a raw, human vulnerability. While the paintings reproduce their features precisely, Davidson deliberately avoids giving them a photorealistic feel, preferring to let their illustrative quality add a dimension of candor. Although undeniably beautiful, there is something haunting about the paintings, as if they are baring the subjects’ souls. The piece above is a portrait of English actor, musician, and theater director Simon Callow. Davidson has painted Callow’s face in extreme close-up, focusing intensely on his central facial features. Color is expertly manipulated to depict the minute variations of skin-tone typically present on the human face: from his ruddy cheeks and faint under-eye circles to the smattering of blue stubble playing on the periphery of his mouth. The paint is scraped and layered to create the impression of lines and wrinkles, giving his face a slightly worn, yet quietly dignified feel. Davidson’s choice to neglect marking the clear boundaries of Callow’s face places the focus of the painting on the intensity of his hazel eyes, painted with a sharp clarity that imbues his face with expression and makes him come alive.

The hazy edges of the canvas both suggest the impossibility of capturing the human spirit – such a changing, indefinable entity – and give the painting a sense of motion, as if it is a moment captured in time rather than a static scene. Callow’s eyes are looking away from the viewer, implying the presence of private thoughts that we will never know. This painting simultaneously conveys a genteel nature and an indomitable strength of will, representing the complexity that is Simon Callow.

Where do you think his thoughts are wandering?