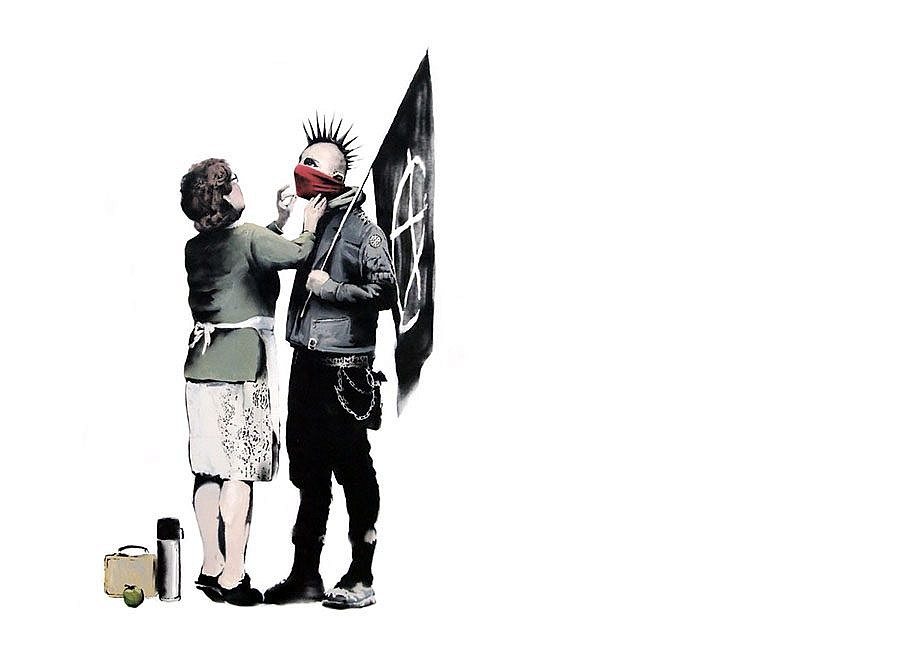 Banksy is an anonymous English street artist, whose stenciled pieces catapulted him to fame during the 1990s. His legacy began with vandalism, but nowadays his artwork captivates people and is consistently in high demand, as is his identity. Many of his pieces hinge on satire and dark humor, commenting on society and politics. In this piece, Banksy depicts sheer love as a mother prepares to send off her black-clad, rebel son, preparing him for his day and fussing with his clothes in a way that suggests the eternal caring of motherhood.

The son is depicted with all the essentials of a potentially frightening figure, from a spiked mohawk to a leather jacket, a bandana covering half of his face, combat boots, and chains attached to his belt. He carries an anarchy flag with him, aligning him with violent revolution and lawlessness. His mother, on the other hand, looks traditional and tame, from her apron and glasses to her modest, conventional fashion. But despite their seemingly opposing values, they share a loving connection. The mother gingerly adjusts her son’s bandana, standing tip-toed to reach him, and her son does not object or even slightly turn away, accepting her help. Behind her is a lunch that she has packed for her rabble-rouser son, a lunch tin, a thermos, and an apple that he will most likely eat during the aftermath of whatever riot he attends.

Through the mother’s eyes, her son is still her little boy. Though he may appear dangerous or threatening, she still loves him dearly and is not ashamed to give him the same affection and care that she always has. And though the son rebels against society and convention, his mother’s own conventionalism does not cause any disturbance in his bond with her. There is no argument on whose ideology is correct, no scolding or anger. The mother supports her son unconditionally. There is a deep love through the tiniest of actions, and Banksy brilliantly tells an entire story through a snapshot of a mother sending her son off into the world. The mother and son provide a model to live by, setting a standard that shatters bias and norms: they accept each other for who they are, not imposing their own ideals on one another, and love each other without question. 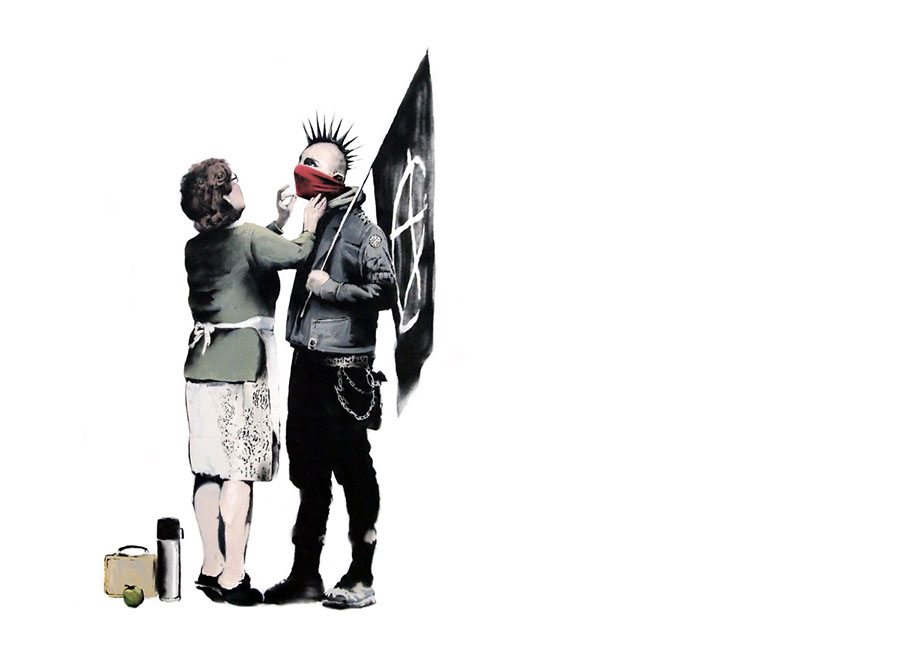 Article Name
Motherhood with Banksy
Description
And though the son rebels against society and convention, his mother’s own conventionalism does not cause any disturbance in his bond with her.
Author
Julia Ortiz
Publisher Name
Pixelle.co
Publisher Logo