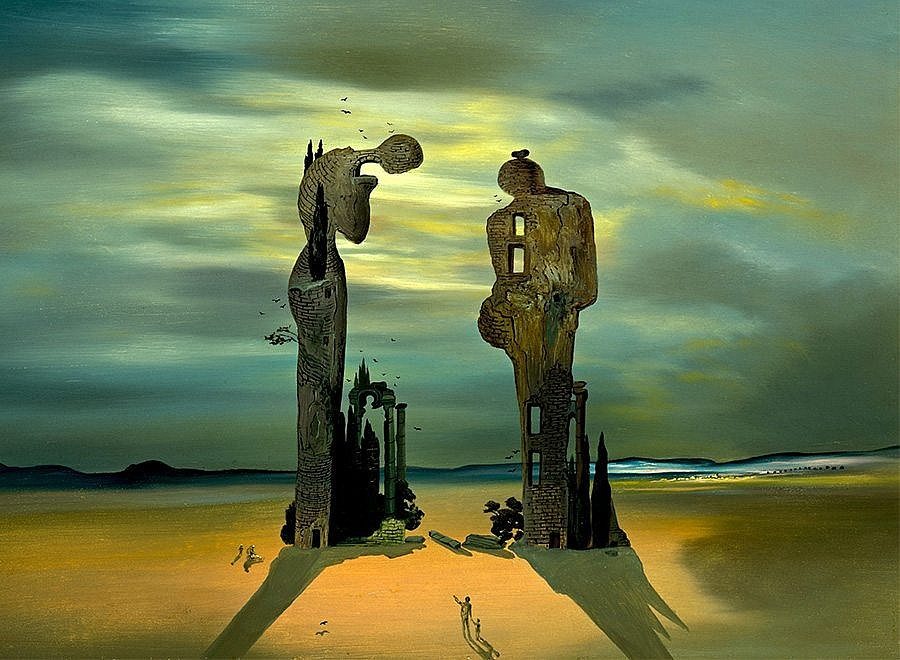 Salvador Dali’s creations can be interpreted as fragmented reflections of his own personal fantasies and phobias – each one gives us a direct glimpse into his psyche. In 1933, he painted The Archeological Reminiscence of Millet’s Angelus, simply described, this work is a foreboding visual culmination of Dali’s fears of the world’s impending disintegration and of his own potential emotional devastation. Fear has often been described as the absence of hope, and this painting can certainly be interpreted a depiction of the consequences of humanity’s darkest tendencies and an augury of the earth’s desolate future.

This image is but one in a series of Dali’s paintings inspired by “The Angelus”, a sobering image created in 1859 by the artist Jean-Francois Millet. For years, Dali was fixated upon finding the meaning in Millet’s piece – a simple painting that shows two peasants in a field, one male and one female, both appearing to stop in a moment of reverent prayer. He eventually concluded that Millet’s painting was a study on death and the dangers of female sensuality, and Dali insisted that the female figure was plotting to somehow emotionally manipulate or physically devour the male one.

Dali had a deeply rooted fear of female sexuality – he was terrified of being emasculated and controlled – but at the same time he was artistically roused by the idea of female dominance and explores this theme often in his paintings. He even went so far as to write an extensive essay on Millet’s painting, wherein he states “…I expressed an irreparable nostalgia for the end of the Carboniferous age with the disappearance of its fauna and flora, and the gradual emergence of human civilization progressively spoiling the virgin state of the world…”  Keeping this in mind, as we continue to observe Dali’s painting we can conclude that he created this work as a visual convergence of his fears for both himself and the earth  – he was terrified of the fate he envisioned would come to pass as a result eventual female dominance and of humanity’s tendencies to destroy their natural resources both which are contradictory for many. An alternate opinion is that female dominance, if anything else, could lead for more respect for both life, the earth and its natural resources.

Article Name
Dali's Fears
Description
Dali was terrified of the fate he envisioned would come to pass as a result eventual female dominance and of humanity’s tendencies to destroy their natural resources.
Author
Miranda Kelton
Publisher Name
Pixelle.co
Publisher Logo