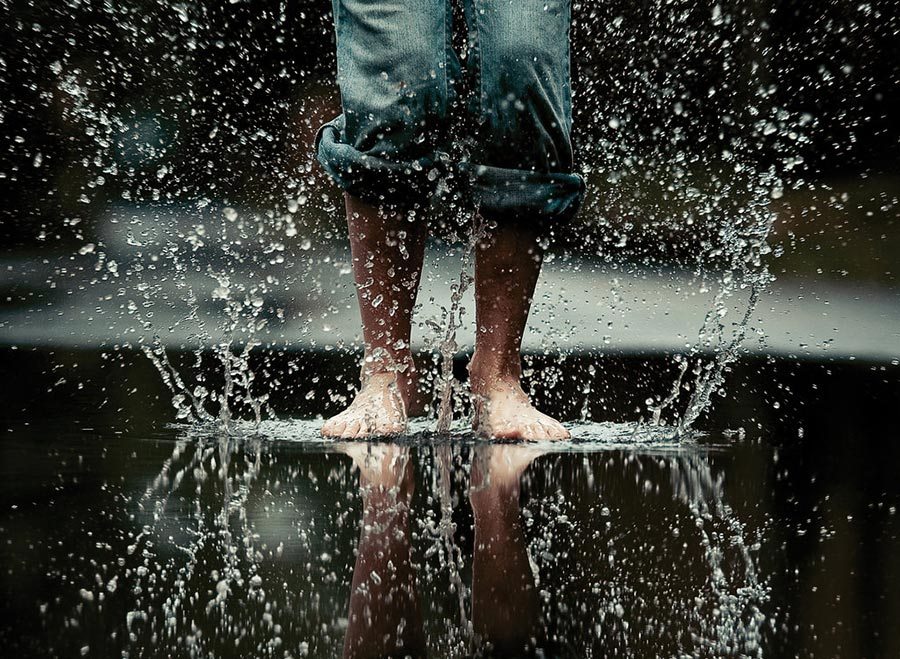 Benoit Paillé is a French-Canadian photographer based in Montréal. His works often focus on landscapes, people, and the expression of the fluid nature of reality. Paillé finds beauty in the mundane, directing the viewer’s attention to common scenes frequently overlooked in everyday life.

The subject of this photograph is a young child who has just jumped into a puddle of water, the surface erupting into a volley of water droplets. The scene is not one of action, but rather reaction: the child has already disturbed the once tranquil surface, and the water responds with an abrupt explosion, affirming its status as not merely a passive element of the setting, but a living element of the photograph. The clarity with which each bead of water is captured evokes a sense of immediacy, almost allowing the viewer to hear the insistent beating of the water. A loud splash – it begins! – and then a series of badum, badum, badum as the beads ricochet off of each other in a chaotic yet almost drum-like kind of tandem. The droplets are projected upwards in a tumultuous frenzy, adding to the sense of rising anticipation present in the photograph. Dance, they sing, move, come alive, inviting the viewer to plunge into the reality of the piece.

Still, the child does not budge from his rigid position, his two feet planted firmly on the ground. He stands as a witness to the clamor he has instigated; yet he no longer takes an active part in it. In the surface of the water lies a mirror reflection of the child, symbolizing the viewer, who is perhaps the subject of the photo in an alternate reality. The viewer is the child himself in life: motionless, granting life to his actions and afterwards bearing the explosion of consequences. The photograph provokes us to take the next step, calling out to the joy living deep within us: Join! Lift up your feet! Shatter illusion; shatter reality!

Is the illusion really so distinct from reality? What do you think of this photograph?